Founded in 1994, Rietveld started selling various telecom, navigation and climate control products. Soon the appointment as an official Webasto dealer followed and the Philips Carin Auto-Navigation was also installed. Between 2000 and 2008, Rietveld introduced the CarCube on-board computer in the Benelux. In 2010, Rietveld introduced its own on-board computer system, the Efficio with which it was possible to integrate with various software and TMS packages, which made this on-board computer a resounding success. Now the third generation, the Efficio3 is a board computer of a different class. Equipped with functions such as a quality camera, navigation from world market leader GARMIN and other extras, the Efficio3 is indispensable for many transport companies.

Rietveld wants to continue to innovate for the next 25 years. “The secret of our success is that we always listen to the customer, so that we can continue to deliver our generic solution as a tailored suit,” says Pleun Rietveld. We are happy to continue this vision in the coming years. In addition, we are active in new markets within the Netherlands with our subsidiary TraSec. We are also growing internationally, both within and outside Europe. 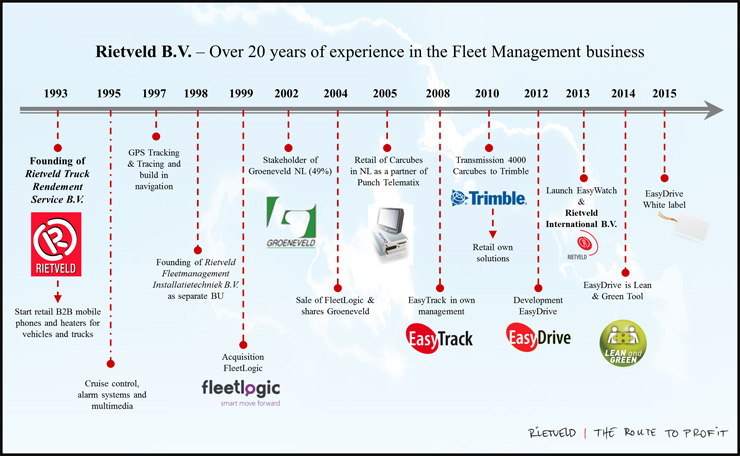 Do you wish to know more?

Ask your question here and someone from our team will contact you as soon as possible!

The power of Rietveld

Do you wish to contact Rietveld? Our team is happy to help! You can reach us from Monday to Friday on the telephone number below from 8:00 AM to 5:30 PM Central European Time.